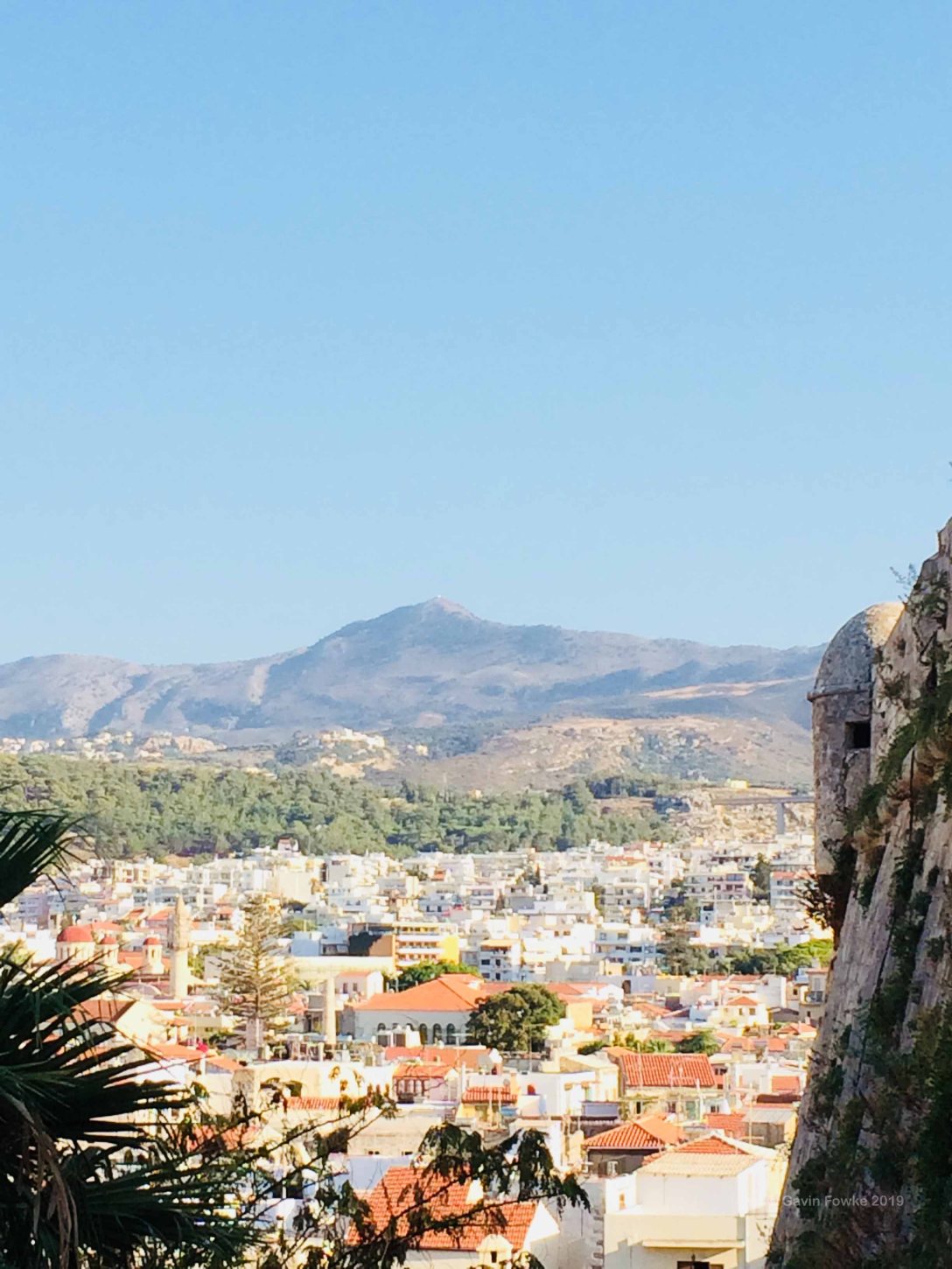 There was a time when I would climb a mountain on a whim.  I’m not talking about technical climbing with ropes and equipment.  No what they call scrambling, where you just find your way up even if it means a little free climbing along the way.  I’ve climbed quite a few in my time, Mount Fansipan in Northern Vietnam, Gunung Rinjani on the Island of Lombok, Indonesia, I’ve even trekked through the Annapurna region of Nepal and hauled myself over the Thorong La pass in the dead of winter.

But it is Greece that I have always enjoyed climbing in the most.  Probably because I love the country so much, but I think perhaps it’s just the smell, the mix of wild sage and goat shit predominant in the mix.  There was a time when I couldn’t look at a mountain in Greece without ending up on top of it.  Things change though, not my love of Greece or the yearning to climb the mountains, but my situation.  Six years ago I had my first child, David, and a year later his brother Oscar turned up, and suddenly life took on a completely different feel.  Months travelling stopped to be replaced by a week away here or there, and I guess lack of support from my other half meant I was left holding the babies most of the time.  That’s as much a metaphor as reality I should add.

Things do change, that’s just life.  It happens to us all, and the mountains became a thing of my past, and I guess my motivation for all things mad and eccentric was driven out by life and children.  Or so I thought.  I’ve been separated for about three years now, bringing the boys up on my own, and that has created even less time for me to do such things.

Last month we flew down to Crete.  My Mum and Step Dad were over for the summer from New Zealand and had booked a villa up in the hills above Rethymnon and were nice enough to ask me and the boys to go stay with them for a couple of weeks. The village we were staying in, Roussospiti is a tiny little place really, but surrounded by deep valleys that lead out to a mountain that rises to the south behind.  897 meters it tells me on the map, I’ve tried to get a name, but the local maps are pretty vague, and even Google is well, not very helpful either.  But that’s not the point.  From the moment I arrived I found myself transfixed by the rising terrain behind and announced immediately that I wanted to give it a climb.  Of course, I’m out of practice, out of shape, and low on motivation for these things nowadays, but the mountain just sat there taunting me, daring me to give it a go.  We drove out that way in the car one day, and I couldn’t really see how to get on the mountain but there were a few little roads and tracks that seemed to be heading, well somewhere.

The hardest part of climbing mountains in Greece is finding how to get on them in the first place.  The lower stretches are normally owned by people, fenced, huge metal gates, that type of thing.  I used to be quite fond of jumping over these, but I’m 52 years old now and have a little more respect for others property than I may have once, and oh yeah I had been reading a book since I got there that told tales of the Cretans and their love for indiscriminately firing guns all the time, so I thought as a responsible parent I should maybe try and find a safer route.

I had got into the habit of getting up to watch the sunrise every day, and one morning I was lying in bed waiting for the day to start and just thought let’s do it.  I threw on my shorts, t-shirt and my flip flops, which is pretty much all I ever wear to climb when it’s hot, grabbed some water and my Iphone (for the camera) and I was off.

The trek out of town was straightforward enough, following the road past a collection of new villas and houses in various states of completion.  In the early morning light everything looks different, an almost orange glow gives the world a surreal effect, and I was tempted to stop a few times to take photos.  It’s all about the journey.  At one point I found a goat’s skull complete with horns just stuck on a metal pole, but all along the way I noticed the detail of rural Greek life, blending in with nature.  The lower valleys are quite lush with a dominance of large Plane trees, and you could almost be in Northern Europe, but as soon as you start climbing upwards this disappears to be replaced with the standard collection of mountain plants, small sharp Holly Oak, Thistles, in fact everything has bards and spikes.  It’s quite harsh with only the sage bushes offering a non-weaponised covering, but these themselves are dry and unyielding.  The soil is full of volcanic rock that increase in size the higher you go, eventually turning into piles of boulders.

I followed two or three tracks that ended in large rusty steel gates, padlocked and secure.  Each time I headed back down to the road, following further out of town until I reached a sharp bend in the road.  Here, I found a track that ended only in a small wire fence that had been pulled across the track and secured only with a piece of twisted wire.  I removed this and went on through, securing it behind me.  From here the track headed directly up to the first ridge I could see, the way now exposed red dirt, iron rich soil.  Soon I came to a little Olive grove and behind this the mountain proper began, so I carried on through, swopping the well-worn track for the harshness off the mountainside, and the climb began.  The way is always slow as you try to step largely on the rocks, avoiding the sharp plant life as much as possible.  If you make contact it tends to tear at the skin, so the secret is to follow the goat trails as they will normally have eaten away some of the flora, but often you just must find your way through a step at a time.  I’ve climbed much harder terrains in Greece though.  I remember having to crawl through bushes on my stomach once or twice on Ithaca in the past, the plants far denser there, almost impassable if not for the goat tracks.

As you climb the hill gets steeper, the rocks get bigger, and eventually you are forced to climb over the boulders that start to dominate the landscape.  The volcanic rock is harsh, rough to the touch, almost like sandpaper, but porous giving ample handholds and with a little experience and tough hands it’s a real pleasure to climb.  It also takes you up faster and before long I was up on the main ridge and the summit stood not far above me.  This is where I struck lucky, about 100 meters short of the summit I found an old dirt road, hidden on the far side of the ridge.  This took me a bit higher and the last climb was well trodden, with very sparse plant life.  Beautiful flowering bulbs stood up all around me and the air became rather busy with Golden Eagles which are quite common on Crete. 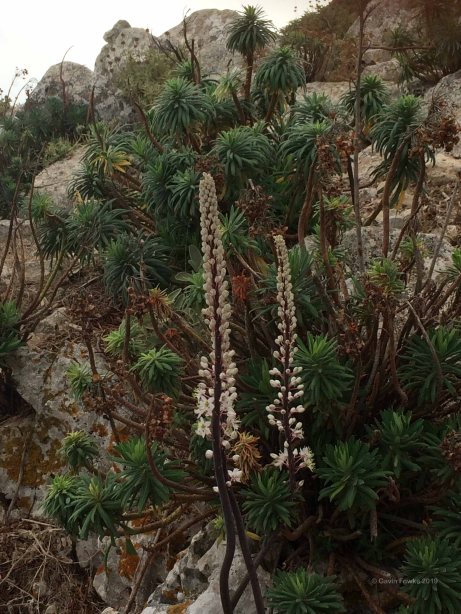 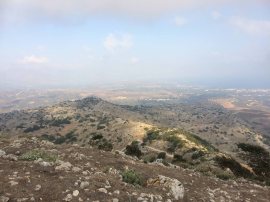 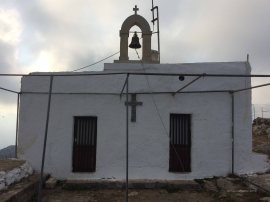 On the summit there stood a little compound, a small monastery building, surrounded by a steel fence.  It seemed deserted, but I have no doubt it was occupied at least some of the time.  The key was in the gate, so I went in to look around, and took time to admire the countryside stretching out all around me.  To the North Rethymnon, the coastline, and the Aegean sea stretching endlessly into the distance, to the South further ranges of mountains stretching off in the still early morning light.

It had been very hot since we arrived on Crete, but that morning there had been some cloud cover for the climb.  Now the sunlight was breaking though throwing sunbeams down on the valley below.  It was breathtaking, but at the same time isolated and barren.

I had climbed away from humanity to find the isolation of the mountaintop, for only here do I ever find total peace and serenity.  I was alive, I was bleeding all up my legs, and aching, but I was alive and once again I knew I was the man who climbed mountains.  The man I always wanted to be.  I have not changed inside, I just have different priorities, but given the chance and the time…….

Eventually though, I followed the track down, it wound it’s way across the ridge and down into the valley, taking three times as long as the climb, but giving me ample time to fully absorb my surroundings, and without the due care and attention required by the hard climb, I was able to fully enjoy the countryside, to see the myriad of both flora and fauna available.  To take my time and just be on the mountain.  There were sheep farms and vineyards, but not a soul in sight.

Eventually though I found my way back to the village, and the villa to find my children were still in bed asleep.  With the right motivation in life we can achieve anything, and for me this is my children and trying everyday to be a better father for them.  With that motivation the impossible just becomes the next big challenge.  When you look in the mirror, who do you see looking back at you?

51 thoughts on “Mountains and Motivation”