These photos were taken in January 2000.  I’d been travelling a while and needed a break so headed to Kho Pha Ngan for the first full moon party of the new Millenium.  I had been to the Island before, but had not timed it for the full moon so this seemed like a very good plan.  As it happened it was an awesome night.  The party raged all not on Haad Rin Beach, whilst a mad electrical thunderstorm kept things really lively.  Mostly of sure it added the perfect backdrop to the party, thousands of fluorescent painted backpackers raving on the sand.

But that was one night.  I found plenty of time to sit in my hammock, take long walks along the beaches collecting shells, and we had some pretty awesome sunsets thrown in for good measure. 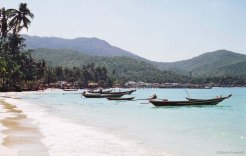 Most of these were taken around Haad Rin beach, but the Pink Lady was a building I found in Thong Sala, the entry point for the Island. 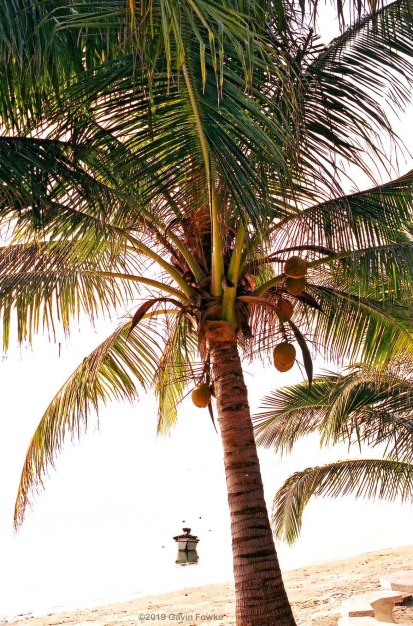 The Final shot in that series was taken after sunset, you can see the fishing boats lit up out in the bay.  They use these high powered lights to attract the fish whilst out at night.  They also use explosives which you hear going off periodically.  The hut was where I stayed.

The two shots above are of the party beach itself.  A little nondescript when not in action.  Just places to eat and drink, and stay if you don’t fancy the huts.  The final shot is a little bit of my sand art which I like to throw in. 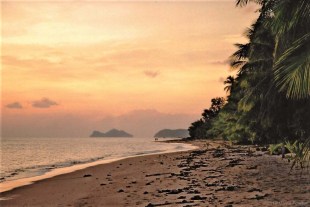 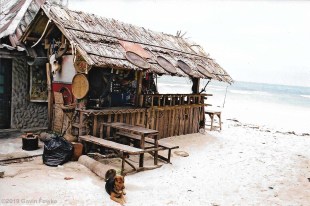 And these were taken walking along the south west side of the Island.  On other trips this is where I have based myself.