It was time now to leave Phnom Penh, unlike most cities, this is actually a place I could stay a lot longer, but there was somewhere we all wanted to go, it was the temples at Angkor we had really come for and that was still a long way off.  We decided to take the boat ride to Siem Reap.  The options were the boat ride through the heart of Cambodia, or another flight.  No contest really.

We were picked up at 6.30 outside the hotel and driven to the ferry port.  Just a small jetty really, wooden and frail looking like the stilted houses all around us that line the river.  An eerie quiet and the darkened sky adding to the adventure, as if we were quietly escaping the city.   As we pulled away sitting atop our motor launch, we passed a community of unevenly supported huts brightly painted and balanced on poles rising out of the dark water, spreading down the river banks and out over the water itself.  Families sat on the uneven decking, supported above the river eating breakfast in their stilted tilted village.

We headed up the Tonle Sap river, the banks snaking away from us and then back together as we travelled on, sometimes nothing more than a channel barely big enough for the boat to pass through.  The river is so unique, the banks lined with an assortment of irregular huts nestling in virulent plant-life, almost a jungle, but broken up by stretches of open ploughed fields cut into the flora.  There is very little sign of man’s progress here, just the jungle and what can be built and grown among it, a truly agrarian existence.  We pass small boats, long and narrow, propelled by men pushing long gondola style poles, some rowing, some even with small outboard engines balanced on the end of long poles that can be levered away from the surface in the shallower parts to leave the launch gently floating on to deeper waters again.

Amazing trees with gnarled ancient trunks supporting dense canopies mixed in with tall palms sporting a range of green spiky haircuts, all matted together with vines along the bank.  The huts always sitting on precarious stilts nestle between the dense undergrowth, keeping the families inside safe from the rising waters.  Nothing has changed here in a hundred years, yet everyone we saw seemed friendly and accepting of our rude invasion of their lives.  I say that because we were on edge a little.  Cambodia at this time was not a place you travelled freely within.  Our route on this trip would take us to the Thai border eventually, a route that had only reopened a matter of weeks before, closed since the days of Pol Pot’s regime to free travel.

We had heard rumours of the boat journey we were on; how various westerners had been shot at and even killed.  Of course, you hear a lot of these things travelling, quite often they are urban myths, but every now and then, well you never really know.  The more remote the location the more intriguing the stories that surround it.  We had already borne witness to the excess of freely available weaponry in the country and how unregulated it was.  As we tore along this otherwise sedate river, you can imagine it is with ample provocation that the locals might me inclined to take pot shots at the passing tourists sending bow waves into their tiny, unstable boats and communities.  Unsettling the peace with huge roaring two hundred horsepower outboards. That said, no-one took a shot at us that day.

The river narrowed suddenly to a barely passable channel, the outboards noticeably hitting bottom the at one point.  The dense forest now tightly packed around us, we continued our journey, weaving through the muddy narrow channel.  Small groups of boats would suddenly appear around bends, but without stopping we always managed to squeeze through, only once actually slowing our pace.  The boat powered through like some intense video game, never easing off and always just managing to avoid wiping out.   Eventually the banks started to flatten out and opened into huge mudflats on both sides and we once again passed into easier waters. 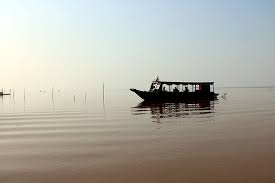 It can’t have been too deep, but we were now in an immense lake, the banks soon just dark lines in the distance.  It was as if we were on a massive mudflat with just a few inches of water covering it.  Small sticks poking out of the water every couple of meters were obviously marking the passable channel as the boat stuck close.  Every now and then we would pass stilted platforms, made from roughhewn wood, stretching into the distance towards the distant banks.  These were obviously walkway coming from the land to the only part where a boat could pass through.  They were at least a mile long.

We weaved between the small sticks, barely avoiding these markers as if the driver were trying to impress us, or perhaps just out of boredom.  At one point the banks became so far away they became barely perceptible, had we gone to sea?  A mud ocean in this surreal world.

It took all afternoon to pass through the lake.  It seemed to go on for ever, with nothing to see, the land just so far away, and the boat trapped in this little channel, unable to go anywhere else than onwards to the end.  You could tell the water was mostly just a few inches deep, but at times, with the water being so muddy, it could have been fathoms.

Then finally the land appeared in front of us again, just a small island it seemed for an age, then a band of green.  Slowly it came closer and eventually we found ourselves surrounded by a small town, perched above the water.  The boat came to a stop at a landing stage backed by a small wooden hut.  Here a group of young men approached us, some carrying bits of cardboard with names scribbled on them.  Was this the limo service we had ordered?  They must have got our names from the passenger manifest, I’m not sure how, this was before the days of mass internet, and this would be the last place on the continent to get a connection I imagine, but they knew our names, and we followed for want of any other options.  We were taken in a smaller boat to the main shore, then we were bundled onto the back of a pick-up truck and taken to the town, Siem Reap, the home of the temples of Angkor.  We were driven around various hotels and guesthouses until we found rooms at the price we were willing to pay, Kev and I bunked together, the girls found a place next door in a neighbouring hotel.

Eventually we got settled, the group broke up for a while, I sat in my hotel room, big airy rooms with large windows, a large double bed.  Almost decadent for those of us used to staying in dollar a night Indian shit holes.  But there was a definite ex-colonial feel to the accommodation in its lush tropical setting.  I settled to write for a while, then lay back on my bed and listened to the sounds of the day. People working outside in the gardens, on the street, cooking in the kitchen hailed by the rattling of pans, very occasional traffic, mopeds and cars passing by, the birds chirping happily in the trees outside and the sound of water running onto the ground outside, my eyes closed and I fell asleep in the afternoon heat.

If you want to read more about this trip or just look at some photos, please click this link.