I’d been travelling solo for quite a while, a few months, most recently a trip up the length of Vietnam where I had just found an offer of work teaching English in Hanoi.  My heart wasn’t really in it though.  Then I got an e-mail from my mate Kev, a Yorkshire man I had met riding camels in Rajasthan a few months before.  He’d talked me into getting a Hotmail account, which was all the thing back then.  I’d never had an e-mail account before and it was only other travelers I knew who had one.  Kev was heading to Cambodia, a place I really wanted to go, so I thought what the hell and flew back to Bangkok.

A walk down the Kho San road turned very fruitful.  I met up with Kev, then just bumped into Madhu, an Australian girl I had met in Vietnam, a little later I found a couple of girls, Aimee and Celine from Mill Hill, London, also who I met in Vietnam, and over lunch we all decided to go to Cambodia, so one became two became five and that was that.

That was the nature of backpacking then as I hope it is now.  You’d meet people, travel together for a bit, then go your separate ways and then just bump into them somewhere along the road.  The Kho San Rd in Bangkok is the hub of all travel in Asia, places to stay, to eat, cheap clothes, jewelry, I even got a tattoo done there once.  But mostly it is the best place to source tickets and visas for anywhere else in the region.  The place is littered with little travel agencies who can achieve just about anything.  So, it was never a surprise to bump into someone you knew there, because everyone ends up there at some point.  If you were travelling long enough, you could almost rely on it.  It was here we sourced our tickets to Phnom Penh and a couple of days later we flew out to Cambodia. 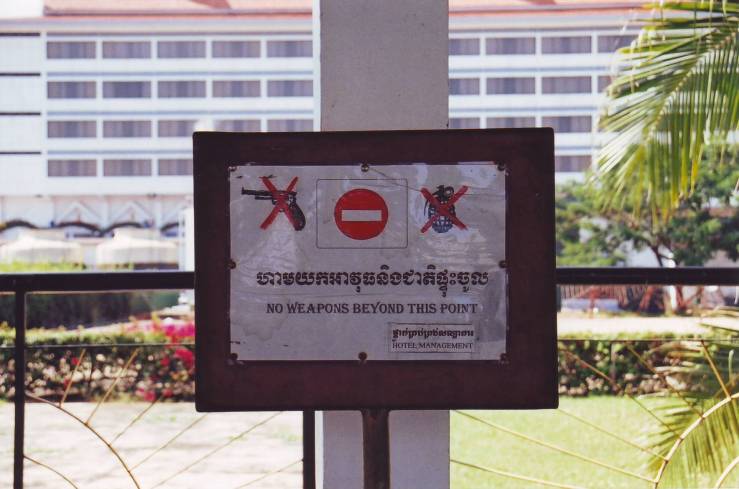 At that time, Cambodia was still largely a dangerous country.  The law existed, but along the borders, in the jungles there were still little pockets of the Khmer Rouge and other groups, nothing to do with revolutionary politics, just profiteering, smuggling, illegal trade with Thailand and other neighbours.   As usual it had just become about money. Pol Pot had been living with the Khmer Rouge somewhere out there, although he had died a couple of weeks before we arrived in country, so it was a monumental time in their history to visit. 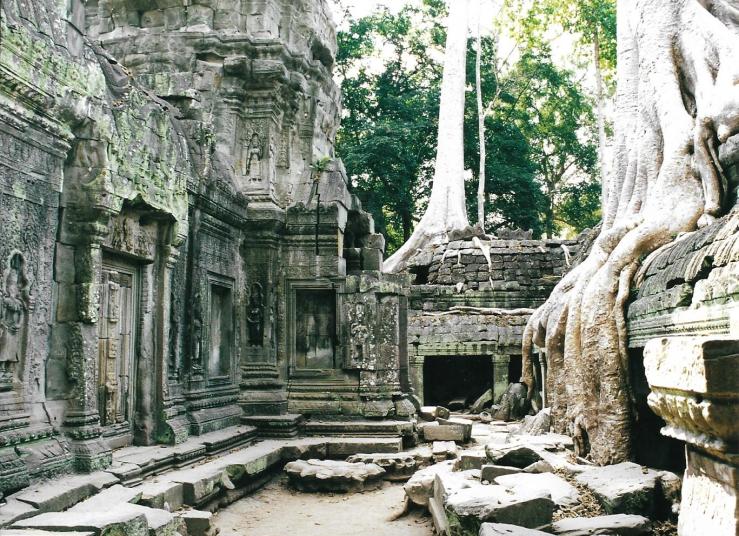 There were a lot of guns left in the country, and not enough law to deal with the situation.  You could travel there, but you had to be aware, and there was no guarantee of safety.  At all.  The government were trying to create some sort of tourism, an attempt to bring foreign money into the economy, but mostly all they had as a draw was the civil war and it’s aftermath,  A rather macabre subject if you think about it, but for the hardcore traveler, this was the ‘real’ Asia we had come to see.  Plus, if you wanted you could fire off a few rounds of a Kalashnikov.

Of course, there was also Angkor and some of the most beautiful temples in the world.  These had largely been freed from the jungle that had over-run them for centuries, and this was what attracted anyone else brave enough to go there.

This series of blogs is about my first trip to Cambodia, I returned a couple of years later, and could already see things were changing, but in 1998 things were still pretty raw.  This story starts in Phnom Penh and may be a little hardcore in places, but when the sight-seeing is to monuments about the brutality of the Khmer Rouge, unfortunately that’s how things are.  Don’t let it put you off, there is a lot of beauty, so much beauty that follows up the initial reality check we faced.  I hope you decide to read, these were some of the most rewarding experiences of my life.

If you want to read more about this trip or just look at some photos, please click this link.