Someone stole my bike the other day.  Right from under where we live.  The security gate had broken and before I had worked this out someone went in and helped themselves to my pride and joy, a classic 1980’s Raleigh Team Banana.  Yeah that’s a thing.  My ex had bought it for me a few years back,  and I had really had some excellent times riding it.

At one time I used to ride everyday from Ham along the Thames to where I worked at Kew Bridge.  Sometimes through the flooded riverside at Richmond, in the water, but everyday photographing and documenting the River Thames as moved from season to season.  Getting to see the river in change close up everyday.  Beats and other commute I ever managed in London.  Exercise, nature, such exquisite memories. 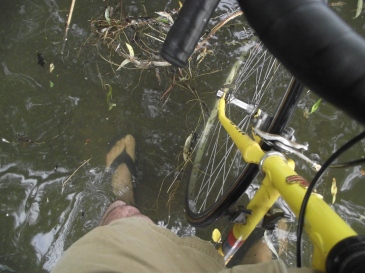 More recently it had become our family vehicle.  I had fitted a child seat on the back, and was transporting my youngest to school everyday on it, while his older brother followed on the pavement on his scooter.  Another chapter.  It was the only way I could get from school to work on time, and then back again in the evening to collect the boys before after school club finished.  It had become more than a bike it was the balance in our lives.

But I’m not upset, not for the loss of the bike anyway.  For the state of society that people feel they can just take things, yeah that real upsets me.  For the fact someone will enter your own property and just takes things.  That really upsets me.  But the bike, well….

Lets face it, it was over 30 years old.  Even with money spent on it recently it was starting to fall apart.  I’ve seen them on Gumtree, yes of course, everyone knows if something gets nicked have a look on Gumtree and you’ll probably find it.  But alas no, but others the same are selling for less than £100.  So whoever took it has just helped me get rid of an old bike.  Which I guess is the first silver lining, but there’s more.  My youngest son, who’s actually 5 now and way too big to ride on the back of my bike, has had to get on his own scooter, and find his own way to school, which is excellent for him and me.

And then after I had that established, I went out and bought a new bike, not an expensive one, hell no, I’m a single Dad bringing up two children, but I found something new and very reasonable on Ebay, so I have a new bike, and for once I have a mountain bike.  Every moment I get I’m out and about exploring the parks round here, Richmond Park, Bushy Park, hey you couldn’t do that on my Team Banana, the tyres were about a centimeter thick.  I feel like a teenager again.  It’s awesome.  So I’m a happy bunny, my youngest is learning a little more about self sufficiency, and some idiot stole an old piece of crap they probably can’t even sell.  Unless they are 6ft plus, they won’t even be able to ride it.

There always silver linings if you look for them.  Life has a funny way of organising itself.  You never can tell when something is just for the best, when that chapter of your life is just over and a new one is due to start.